Cardinal Avery Dulles, S.J. (1918–2008), was one of the leading American Catholic theologians of the twentieth century. Published in partnership with America Media, this collection of Dulles’s essential work from America magazine includes more than five decades of writing that showcases his wide-ranging interests in ecclesiology, salvation history, pastoral theology, and contemporary literature and reflects the Jesuit’s warm personality and astute insights on the Church in an era of great change.

Avery Dulles: The Essential Writings from America Magazine includes occasional and formal writing, book reviews, reflections, and extended essays from America. Known as a synthesizer of Catholic thought from disparate traditions and theological positions, Dulles is perhaps best known for his book Models of the Church, one of a number of important academic works he wrote. Dulles was the author of twenty-five books and produced hundreds of articles for America and other journals.

In these selections from America, Dulles reflects on theological questions such as the relationship between faith and reason, as well as events like the Second Vatican Council that affected average Catholics. Avery Dulles also includes the late cardinal’s exploration of the teachings of John Paul II and the authority of the episcopacy—solidifying our understanding of Dulles as both a towering figure and a mediating voice in American Catholicism.

The Legacy of Avery Cardinal Dulles, SJ: His Words and His Witness 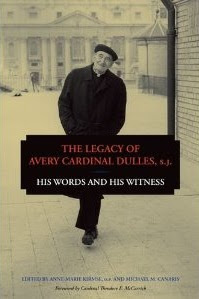 The Legacy of Avery Cardinal Dulles, S.J.: His Words and His Witness

Ann-Marie Kirmse (Editor), Michael Canaris (Editor), Cardinal Theodore E. McCarrick (Foreword)
Fordham University Press (September 1, 2012)
In his nearly 50-year career teaching philosophy and theology at Fordham and other distinguished universities, Cardinal Avery Dulles wrote and traveled extensively, writing 25 books and more than 800 articles, book reviews, forewords, introductions, and letters to the editor, translated into at least 14 languages and distributed worldwide. This work serves as a companion to the previous volume of McGinley Lectures, published as Church and Society (Fordham, 2008), and also provides an independent research guide for scholars, theologians, and anyone interested in American Catholicism in the decades immediately before and following the Second Vatican Council.

From his poems and reflections composed in prep school where he first crossed paths with John Fitzgerald Kennedy (with whom he would graduate from Harvard in 1940) to a private meeting in his last days arranged at Pope Benedict XVI's personal request, the book explores a theological topography that includes truly monumental figures and events of the modern era. As the product of perhaps the most influential American Catholic theologian in history, Dulles's writings continue to inspire and shape the way theology has been studied and practiced in academic institutions throughout the United States and the world.

Having worked closely with Cardinal Dulles, the editors have compiled an exhaustive bibliography of his works and have included a series of essays that shed light on the twilight of his life, one that intersects with ecclesiastical, theological, philosophical, and political leaders of every stripe and worldview. Contributions include Dulles's farewell lecture as McGinley Professor of Religion and Society with a stirring response by Robert Imbelli; a reflection on the Cardinal's last days by longtime research assistant Anne-Marie Kirmse, O.P.; and the moving homily given at his funeral by Edward Cardinal Egan.

The book also chronicles Cardinal Dulles's relationship with Fordham University, where he began his academic career as a Jesuit regent, teaching philosophy (1951 53), and where, for the last twenty years of his life, he held an endowed chair named in honor of a former president of Fordham, Laurence J. McGinley, S.J. This text will serve as a liminal passageway into the splendid mansion of Dulles's thought for theologians, scholars, believers, and all thinking men and women of goodwill.

Cardinal Avery Dulles, SJ, is the foremost American Catholic theologian of the post-Vatican II era. This book is a religious and intellectual biography that focuses on his contributions to the development of American Catholic theology and to the larger arena of American Catholic life. The book traces his life and thought from his childhood in a prominent American Presbyterian and political family to his days as a student at Harvard where he converted to Catholicism, to his World War II experience in the Navy, to his ordination as a Jesuit, and then to his career as a theologian in the post-Vatican II era. In the entire twentieth century, no other theologian, with the possible exception of John Courtney Murray, SJ, has had as important an impact upon American Catholic thought. Dulles, though, is unmatched in the twentieth century because of his prolific publications and the wide distribution and reading of his published theology. More bishops, priests, and religious, as well as large numbers of laity, have been influenced by his writings and by any other single American theologian. This book will put his contributions to theology within the wider context of his religious life and the cultural and religious transformations in the United States during the last half of the twentieth century. 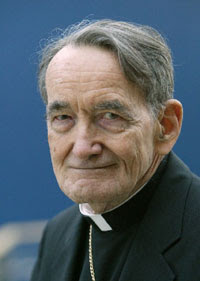 Avery Cardinal Dulles passed away at about 6:30 on the morning of December 12th, 2008 -- at Murray-Weigel Hall, the Jesuit infirmary, located at Fordham University, in Bronx, New York.

Obituaries | In the News

"Having learned with sadness of the death of Cardinal Avery Dulles, I offer you my heartfelt condolences, which I ask you to kindly convey to his family, his confreres in the Society of Jesus and the academic community of Fordham University. I join you in commending the late Cardinal's noble soul to God, the Father of Mercies, with immense gratitude for the deep learning, serene judgment and unfailing love of the Lord and his Church which marked his entire priestly ministry and his long years of teaching and theological research. At the same time I pray that his convincing personal testimony to the harmony of faith and reason will continue to bear fruit for the conversion of minds and hearts and the progress of the gospel for many years to come. To all who mourn him in the hope of the resurrection I cordially impart my apostolic blessing as a pledge of consolation and peace in our Lord Jesus Christ." - Pope Benedict XVI.

Avery Cardinal Dulles, S.J., is currently the Laurence J. McGinley Professor of Religion and Society at Fordham University, a position he has held since 1988. An internationally known author and lecturer, he was born in Auburn, New York, on August 24, 1918, the son of John Foster Dulles and Janet Pomeroy Avery Dulles. He received his primary school education in New York City, and attended secondary schools in Switzerland and New England. After graduating from Harvard College in 1940, he spent a year and a half in Harvard Law School before serving in the United States Navy, emerging with the rank of lieutenant.

Upon his discharge from the Navy in 1946, Avery Dulles entered the Jesuit Order, and was ordained to the priesthood in 1956. After a year in Germany, he studied at the Gregorian University in Rome, and was awarded the doctorate in Sacred Theology in 1960. He was created a Cardinal of the Catholic Church in Rome on February 21, 2001 by Pope John Paul II.

The author of over 700 articles on theological topics, Cardinal Dulles has published twenty-two books including Models of the Church (1974), Models of Revelation (1983), The Catholicity of the Church (1985), The Craft of Theology: From Symbol to System (1992), The Assurance of Things Hoped For: A Theology of Christian Faith (1994), The Splendor of Faith: The Theological Vision of Pope John Paul II (1999), The New World of Faith (2000), and Newman (2002). The fiftieth anniversary edition of his book, A Testimonial to Grace, was republished in 1996 by the original publishers, Sheed and Ward, with an afterword containing his reflections on the past fifty years.

Avery Cardinal Dulles passed away at about 6:30 on the morning of December 12th, 2008 -- at Murray-Weigel Hall, the Jesuit infirmary, located at Fordham University, in Bronx, New York.

The Creation of Cardinal Avery Dulles - Consistory in Rome, February 21, 2001 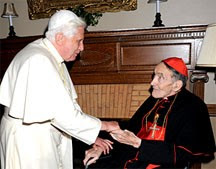 "The Pope literally bounded into the room with a big smile on his face. He went directly to where Avery was sitting, saying, 'Eminenza, Eminenza, I recall the work you did for the International Theological Committee in the 1990's.' Avery kissed the papal ring and smiled back at the Pope. Then the Pope looked at the people in the room who had accompanied Avery to the Seminary: Fr. Tom Marciniak, who served as Cardinal Dulles's priest-chaplain for the meeting; Sr. Anne-Marie Kirmse, O.P.; and Francine Messiah and Oslyn Fergus of the [Jesuit infirmary's] medical staff. After this warm and friendly exchange of greetings, the Pope sat down next to Avery to hear the remarks that Avery had prepared and which were read for him by Fr. Tom Marciniak. During the presentation, Fr. Tom handed the Pope a copy of Avery's latest book, Church and Society: The Laurence J. McGinley Lectures, 1988-2007, which was published earlier this month by Fordham University Press. The Pope expressed great interest in the book, and even interrupted the reading of the remarks to ask again when the book had been published. He eagerly looked through it, and was touched by Avery's inscription to him. Before leaving, the Pope blessed Avery, assuring him of his prayers, and encouraging him in his sufferings. He then said good-bye in turn to each of the four persons who accompanied Avery."